And hey, they are only a minute long. Click here.

Tracey Baptiste teaches a marvelous workshop on creating a three-dimensional antagonist. Seek her out. She give lots and lots of prompts and questions to build a substantive antagonist. What I call creating a good bad guy. Or a bad guy who is complicated, conflicted, interesting. I mean who wants a predictable, one dimensional bad guy? It so much more interesting to have a bad guy with a backstory and a story arc that sets them in conflict with your main character. For instance, if you have a controlling parent in conflict with a teen or middle grade protagonist. Look deeper. Why are they controlling? Are they operating out of fear? Why? Do they know something the main character doesn’t? Make your antagonist as interesting as your main character. It will be a much richer story. 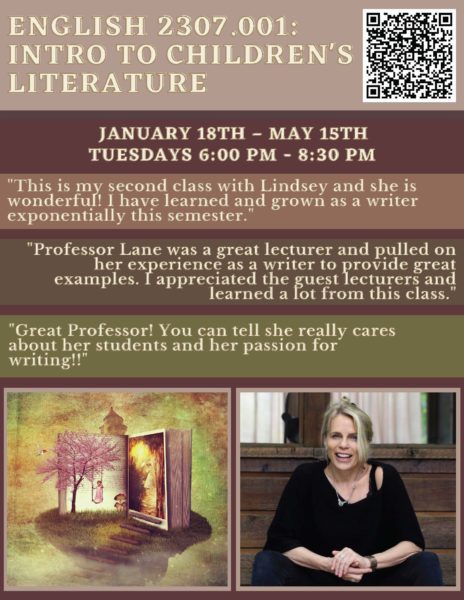 I remember when I first heard the opposite expression: Those who can’t, teach. It was said by a grumpy filmmaker who wasn’t getting the work they thought they deserved and teaching what they knew to others was somehow less than doing their precious work.

Nothing could be further than the truth.

Teaching keeps my craft tools sharp. Teaching interrupts the isolation of writing. Teaching is building community. Best of all, teaching is about nurturing the creative spirit.

I was invited to join the adjunct faculty at Austin Community College’ Humanities Department in Spring 2019, specifically to teach Beginning Creative Writing: Introduction to Children’s Literature, a course which had been ably helmed by my friend Liz Garton Scanlon. The following year, Brian Yansky retired and I was asked to teach his Introduction to Young Adult Fiction.

Each class, each semester is a new adventure. Yes, we cover the principles of creative writing (Point of View, Setting, Character Development) but the journey of writing for each student, tapping into their unique creativity is very individual. It is my intention with each course  and with each class to nurture that spirit in each student.

In other words, I don’t teach by rote.

The craft book we use for the semester is Marion Dane Bauer’s What’s Your Story, an excellent clear book on craft. Students must also read ten picture books, one middle grade and three easy readers. Through reading, class assignments, writing exercises, students will create a portfolio of their own work by semester’s end. This semester, I am going to incorporate the thinking of Felicia Rose Chavez and Matthew Salesses in an effort to create a classroom where each person’s  creativity can flourish.

The two hour and thirty minute class starts Tuesday Jan 18 @6pm and runs for sixteen weeks until May 10. Register here:

And hey, they are only a minute long. Click here.

When my students are writing in the first person or close third, I often circle these verbs: felt/feel, see/saw, think/thought and ask them, “Do you need to use these verbs, if we are already in the main character’s point of view?” Oddly, these verbs can be distancing if we are already in a characters head. It feels risky to take them out. Like maybe the reader won’t know who is thinking, seeing or feeling. They will. If you have created a story in which the reader is fused with your main character, you can let go of these distancing verbs.

We interrupt our regularly scheduled broadcast for this special announcement:

I think you know how much going to the women’s prison in Gatesville every month means to me. What began as research for my novel Truth Inside has become a devotional service. Though I had volunteered for many different projects and organizations before, I had never really understood what it meant until I was in a circle of women serving twenty, thirty, sixty-year and life sentences. There is something about getting out of my well upholstered pathways and doing the simple thing of showing up, dependably for six years now which has, well…Here it is in a nutshell: First, I went for me. Then I went for them. Now I go simply to be there with them because I care about them.

Why give to Truth Be Told? After all, it’s such a small organization that reaches a relatively small population within a burgeoning prison population. Truth Be Told is small but mighty. A dedicated group of volunteers. A twenty plus year history. A simple but effective teaching design that allows women to unshackle themselves from the shame of their past and think about the kind of women they want to become.

So consider Truth Be Told in your Giving Tuesday thoughts and considerations. Here is the link to give: https://secure.givelively.org/donate/truth-be-told/raising-100-000-in-10-days 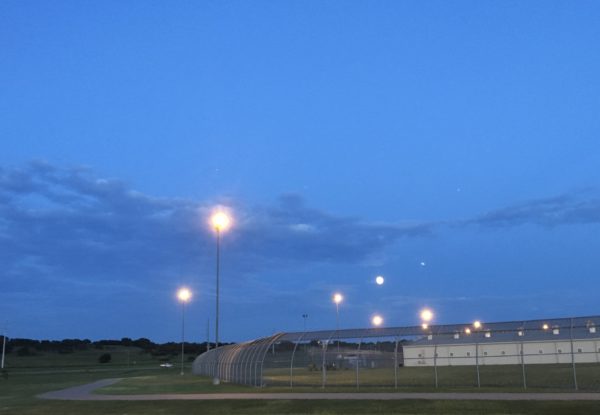 A constellation of moons above the fence in Gatesville 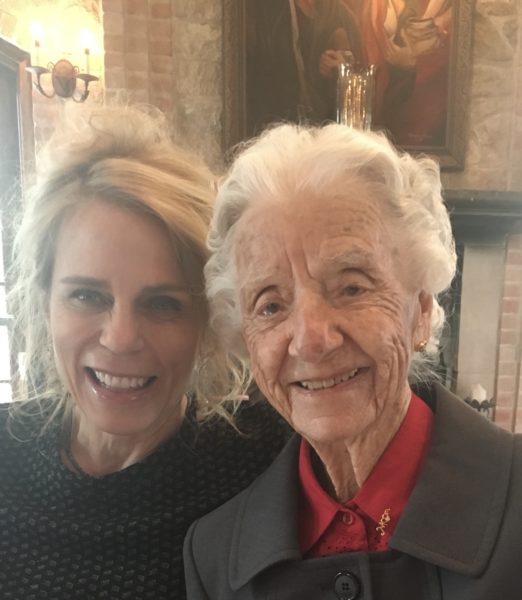 “What has my favorite 101-year-old been thinking about? I glance over at Betty X Davis in the passenger seat of my car. She is sitting ramrod straight and leaning forward, as if eager to get to the Austin SCBWI annual conference. It was her duty to present the Young Writer’s of Merit Award named in her honor. While she was never a large woman, she has become more petit as she has gotten older. But she is still sharp as a tack.

“Betty, who, pray tell, is Doak Walker and why have you been thinking about him?

“Well, Doak Walker was a pretty famous Texas football player and Harvey was just sure that he was the Walking Man.”

“Wait. What?” Clearly, I had entered midstream of whatever memory she was having.

“Never heard of it.”

Betty eyed me and winked. “Well, I suppose you are a bit too young for it.”

“Would you tell me about it?”

“Sure, she said brightly. “It’s a pretty good story.” I settled in to navigating the streets to the conference as she spun the tale.

“Well, every Saturday night, Harvey and I listened to a contest on the radio called the Walking Man contest. I suppose the whole country listened to it. It was a fundraiser for the American Heart Association.  At the end of the program, the host, Ralph Edwards, called someone to guess who was the mysterious walking man at the end of the show.”

I was a little confused. “This guy called people out of the blue to guess footsteps?”

“Oh no, no, no…It was a contest to raise money for the American Heart Association. You had to send a dime and a  fifteen word slogan about preventing heart disease to an address in Hollywood, California. On the show they’d pick people from the contributions to call. Nobody could guess it. Every week, the prizes were piling on. Motor boat. A Car. Washer. Dryer. A fur Coat. Everyone was crazy for the Walking Man contest.”

Now I was leaning forward as I drove. “So you entered the contest?”

“Oh you know me. I love a word contest. But I knew I couldn’t be a winner. I had five children and the winner would have to go Hollywood. I couldn’t do that so I asked my aunt Florence, my mother’s sister, in Chicago if I could enter her name. She thought that would be just dandy. She was widowed and worked in a department store in Chicago. Florence Hubbard. So I sent in my dime and a slogan. Want to know my slogan?”

“’Not even miracle men of science can hang a Number One Killer on a shoestring.’ Pretty good, right?”

Okay, I need to pause in this little story. Are you getting this? A 101-year-old woman is telling me this marvelous story with amazing details. Settle in, friends. There’s more.

“It’s fantastic. So what happened?”

“Did you know that contest of dimes raised the most money ever for the American Heart Association? A million and a half dollars.”

“Everybody in America was listening to the Walking Many contest. Like I said, Harvey was certain it was Doak Walker. I didn’t think so. Not enough people knew a Texas football player. But nobody had guessed yet. The prizes were piling up. A sewing machine. A typewriter. Living room and Dining room sets. People were going crazy. Then one Saturday they gave another clue. The walking man played the violin. Terrible. And I knew who it was. I’d heard him play the violin in some show or other and he was awful.”

“Who was it?” By this time we had pulled into the parking lot at the conference hotel and I was searching ‘Walking Man Contest’ on my phone.

She smiled at me. “Now remember, I didn’t enter the contest. It was my aunt, Florence Hubbard. I had children and the winner would have to go on tour with the Walking Man. But I knew who it was. I called Aunt Florence in Chicago and told her who I thought it was.

“But you didn’t know if they would call her?”

“No. we had to wait until the next Saturday night.”

“Were you listening when they called her?”

“We were. She had just gotten home from her job at Carson’s Department store in Chicago. It was raining and cold. When the phone rang, she had just gotten out of the bath and put on a bathrobe. Can you imagine? She picked up the phone and there was Ralph Edwards asking her if she knew who the Walking Man was. We were listening in Texas and she said, ‘Is it Jack Benny?’ ‘Did you say Jack Benny, Mrs. Hubbard?’ ‘Yes, I did.’ ‘You are the winner, Mrs. Florence Hubbard of Chicago, Illinois.’ You never heard such a commotion. The people on the radio were yelling. Dorothy was laughing and saying, ‘Oh my. Oh my.’ Our kids were running all over the house, yelling, ‘We won. We won.’ They, of course, thought we were going to be rich.”

“Oh, heavens no. We had some fun. Do you know Aunt Florence went on tour with Jack Benny for a year and he sent her flowers every year on her birthday until she died? Quite a nice fellow. Terrible violin player but a nice fellow.”

I walked Betty into the conference and helped her take her place at the podium where gave out the Austin SCBWI Betty X Davis Young Writers of Merit Award to the elementary, middle school and high school winners. She looked out at the audience and said with a wry smile, “You know, we all can’t be winners so it’s nice when it happens.”

Yes it is. She would know.

This Friday, November 26, I will visit my dear friend on the occasion of her 106th birthday. She doesn’t recognize me anymore. Hearing aids and masks are a total frustration. She quotes Shakespeare at length and often will shrug her shoulders and say, “Je ne sais pas.” When I tell her I love her, she pauses as if trying to connect my words with whomever I might be. Then she shrugs again. It doesn’t matter who I am. Love is Love is Love.

If you would like to donate to the Austin SCBWI Betty X Davis Young Writers of Merit Award, click here.